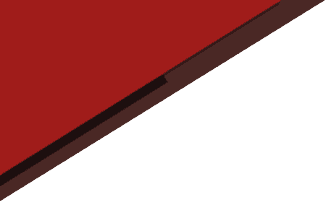 The Crest of Bishop White Seminary is based upon the personal Coat of Arms of the second bishop of Spokane, Bishop Charles Daniel White. The left side of the shield is the Crest of the Diocese of Spokane. As nearly as can be determined, the translation of the word “Spokane” means “Children of the Sun.” We therefore have on the shield, first, the Cross of Faith, then a heraldic sun for the name of the See, and finally a lily, emblem of Our Lady, to whom the Cathedral Church is dedicated under her title of Our Lady of Lourdes. 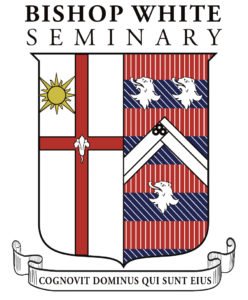 On the right side of the shield, the field (background) is the same as that of St. Charles Borromeo’s family coat-of-arms, which show simply a series of horizontal stripes of alternate red and blue. The color blue is traditionally associated with Mary, the middle name of the patron saint of pastors, St. John Marie Vianney, a relic of whom is in the seminary altar. The color red denotes the priestly office of Christ, which is exercised in self-sacrificial, merciful love.

Lions are the prophet’s heraldic attribute, and the three are in honor of the Holy Trinity. The lion is also—according to the Dictionnaire des Symboles by M.P. Verneiul—a symbol of humility. Thus, the lions represent the prophetic office of Christ, which he exercises in humility in order to bring all of creation into communion with the Holy Trinity.

The carpenter’s square is added as a symbol of St. Joseph, Foster Father of Our Lord, Protector of the Church, and Patron of Workers. Because it is an instrument used by artisans, it is also an emblem of justice and truth. In addition, it is a reminder of Bishop Charles White’s own alma mater. Thus, the carpenter’s square recalls the Royal Office of Christ, ordering all things (beginning with our own lives) to the glory of God and the salvation of souls, under the guidance and protection of St. Joseph, who taught Our Lord the carpenter’s trade.

The Latin motto “Cognovit Dominus Qui Sunt Eius” is taken from 2 Timothy 2:19, where it is a citation from Numbers 16:5. The English translation is, “The Lord knows who are His,” and reminds us that the Lord has a plan for each person’s life, and our task is to discern and accomplish His will. Bishop White Seminary exists to help each man know and embrace the Lord’s will for his life.